Having only been recently published, and receiving money for my work, I can say its one of the most interesting turning points in my life. In that, nothing turned. I have kept a journal for many years, and in that time have written many things. Shallow and deep things on many subjects that were important to me at the time, and in retrospect and after careful reading, the vast majority of them weren’t very good. I’ve always tried to create, while I’ve pined through different jobs that have paid me very decent money, but all the while I’ve wanted to make a living with my art. Either drawing, or painting or writing; I didn’t want to continue existing simply maintaining the bottom line of some corporation.

I don’t expect my writing or my art will ever produce enough money to sustain me, but just being able to create something for public consumption is all I was really aiming for. But that’s different than what I thought it was. In hindsight, it seems so obvious now; and some reading this may even find it silly: when you create for public consumption, other people will read it. They will judge you, and that’s good. The worst thing you can do as an artist is surround yourself with people who will not openly criticize, when invited. These people know you, they know how you act and how you speak, and they will put your voice behind everything you write. To them it sounds natural, because it’s you, in the context of you.

I don’t think that’s what makes a good writer. It’s not about knowing when to put the fancy words in, or show off your vocabulary skills. Writing is for the reader. You’re painting a picture, and letting the reader fill in with their imagination. If you are forcing your own language into your work, you’re essentially forcing the reader to receive it as you’ve imagine it; you’re not letting them play in their own imagination.

Growing up, I remember reading many books. I had significantly more time then, and I would spend hours reading and rereading through all sorts of genres, novelists, screenplays and comic books. Isaac Asimov, Anne Rice, Carlos Castenda, Michael Crichton and Neil Gaiman filled my head with new worlds that didn’t exist before they created them, and that power amazed me. 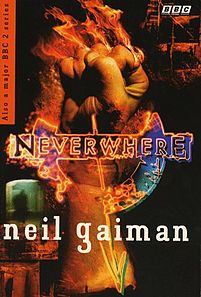 I remember reading Neverwhere by Neil Gaiman, and having this perfect image in my head of what Door, and Richard may look orsound like, the battle of the Hunter and the Beast of London Below was so vivid in my mind, I was engulfed in this imagination so deeply, I could almost smell the underground. I heard there had been a BBC television adaptation, and I had to find it. This was long before downloading a film was optional. I eventually found a bootlegged version on eBay; and anxiously waited for it to be mailed through the post from the ether, because in those days, people just left, and things simply came. They weren’t tracked and available at an instant.

When I received this VHS with its hand written label, I couldn’t wait to watch. It was a spiritual moment; surely what I had envisioned was what they had filmed! What I read and saw in my head what the only way it could be!

It wasn’t, and I hated it. I kept it, and still have it. I’ve even purchased its reprinting when it was officially available in the states, because I loved the story so much, but I haven’t watched it since. My imagination ruined that film before I had even received that bootlegged version; when it was written, it was done in such a way, whatever Neil saw was not forced onto me. His words gave me a nudge into the direction he wanted the story to go, he gave me elements of the environments, without demanding my imagination see or do anything other than the storytelling.

I’m sure all of my writing for my own amusement forgot that lesson. They were only letters written to me. The few people that have read them already had a concept of my voice, and where I probably intended to go. But when writing for people on the other side of the country, or the world as a new writer does today; one simply can’t bully the reader. They will never hear it in the writer’s voice, and generally, they wouldn’t enjoy it if they did. Only writers lucky enough to have built a fan base, who are familiar with their own voice, will be able to succeed in such an environment.

Miles Davis once said “You have to sound like a lot of other people before you sound like yourself”, and that’s very true. But another element of that, at least in my writing, is: you have to let your reader sound like themselves. I want to be the writer that lets the readers experience their own imaginations, nudging them along, giving a fresh idea, or my own spin on how I saw it, without forcing my own voice. In that, I will have found how to sound like myself.