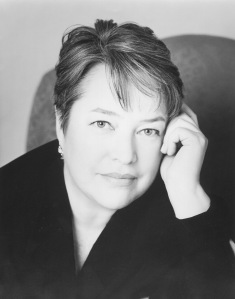 Misery, right?  Most people see Kathy Bates and think – “oh, the crazy broad from Misery“.  Well, yes- Kathy Bates was that crazy lady in Misery (Im gonna call her Kathy for the rest of this.   She and I are on first name basis… she doesn’t know that, but should we ever meet, she can certainly address me by first name, and since I’ve seen Misery and own Dolores Claiborne on VHS; I feel I’ve earned it).

Misery may have been the first time I recognized her, but I remember her from St Elsewhere, and even Dick Tracy (the Warren Beaty one)- and any kid from the 90’s saw the Fried Green Tomatoes commercial over and over and over… or maybe I watched a lot of TV then, maybe my sisters just loved that movie.  Something about Steel Magnolias...  But I digress, what I most remember Kathy Bates for was her titular role in Dolores Claiborne.  A simply stunning film about a New England caregiver accused of murdering her patient.  My mother was a home health aide and has been a caregiver all her life- and this likely lead to my particular affection towards Kathy Bates.  As the movie progresses, we learn that good ole’ Dolores did not, in fact, kill her ward (but she was ready and willing to), rather she did murder her husband decades before.

But even as she delivers her admission statement to her snotty little daughter, I just wanted to hug her.  Cold and tried by the world, she just looked lovable and good natured.

Cut to Misery.  Less amiable, but still amazing.  Although, at closer inspection, if that writer had just played along, and not ignored his biggest fan, and maybe just tried to be a better house guest, none of that business with the penguin, pig statue, or hobbling “spat” would have been necessary!

I skipped About Schmidt, I heard about the hot tub scene.  I love Kathy Bates, I don’t want to make love to her.

Anyway- this entire diatribe that started more interesting in my head then its ending on computer was started because Kathy Bates is in this season of American Horror Story.   I won’t spoil anything (because I’m not far enough in to spoil anyway), but her character is not particularly nice.  Not exactly a good person one could say.  But even as she pouts across screen, spewing racial epithets, and threatening hell and damnation upon anyone she comes in contact with, some deep part of me wants to hug her.  Maybe get her lunch.  But certainly a hug.

I want to gush more about her pained, nuanced performance.  Constantly aching over her character and developing constantly through expression… but I don’t want to ruin it for the viewer.

So, good on you FX for putting Kathy Bates on my teevee box, and thank you Kathy Bates for being awesome.  I hope you get to kill Precious by the end of Season 3.

Oh.. that was probably a spoiler.  The girl from Precious is in it.