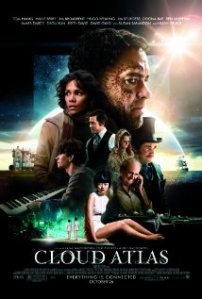 “Our lives are not our own. From womb to tomb, we are bound to others, past and present; and by each crime and every kindness, we birth our future.”  This is the tag line seen on ambiguous commercials and adverts for Cloud Atlas.  It doesn’t seem to tell you much about the general feel or message of the film.  After the first viewing it becomes clear, there is no more succinct way to describe what this film is trying to say.

At its core, Cloud Atlas is six separate story lines, concurrently interwoven to convey the same message.  While it may sound convoluted or difficult to follow, in execution it stays clear throughout.  This is achieved by the stark contrast of the visual styles utilized by the Wachowskis (The Matrix series, Speed Racer) and Tom Tyker (Run Lola Run, The International) directing each piece independently.  Each section is so visually different, the audience is immediately aware of the shift.  From a voyage in the Pacific in 1849, to a post-apocalyptic Hawaiian island, each shift is like watching a separate film entirely.  Muted browns, and creams in 1973 San Francisco jump to vibrant blue’s and sun-swept reds of the South Pacific seas in the 1800’s, that may then open the door to deep technical blacks and greys of Korea, 2144.

That is not to say this film is all art and story.  At just under three hours, total running time, the filmmakers certainly are asking for an investment from the viewer; but that amount of time is completely necessary to not only weave such a movie together, but also let you watch how it is built.  Like a magician doing a card trick for you, slowly; showing you every move of the cards without knowing the prestige at the finale.

The same cast is utilized in each story, but they are not the same lineage in each time line.  Villain, hero, love interest, antihero, misanthrope- while intentions may seem apparent at the onset, most often they don’t play out as expected.  This is not a story of reincarnation.  This isn’t a story of fixing the wrongs a person may have committed in their lifetime.  This is not karma, justice, man versus man, or man verses environment, but it is a flowing stream of consciousness of how each person may experience the effects of every time before; and ultimately, something bigger than themselves.

It would be overly simplistic to say the movie begins as many tales: with a very old man, scarred and tattooed, resting by firelight; introducing a tale in the darkness.  Immediately we are introduced to our timelines, each one visited only long enough to get comfortable; then seamlessly transitioned into the next storyline.

Chatham Islands, South Pacific seas, 1849; an American is conducting business, when he is confronted by the violent whipping of a Moriori slave.  Cambridge, England, 1936; a young musician is on a quest to compose his masterpiece (the eponymous Cloud Atlas Sextet).  San Francisco, CA, 1973; a reporter gets a unique lead on global conspiracy.  United Kingdom, 2012; a publisher falls under an extreme set of circumstances brought on by a client.  Neo Seoul, Korea, 2144; a clone is giving a final interview after the tumultuous conditions that lead her to trial.  Lastly, a post-apocalyptic Hawaiian Islands (revealed in the credits as 2321), the remnants of human civilization learn the conditions that lie at the core of their beliefs.

None of the stories told seem to have any relevance to one another; and therein rests the wonder of the original storyteller’s vision.

Cloud Atlas has currently finished its theatrical run, is available from the right sources now, but will ultimately be released on Blu-Ray, Ultraviolet digital download, and DVD on February 5th,.